Sick leave: how does the UK compare to the rest of Europe?

It’s no secret that January (and Blue Monday in particular) can be a bit of a draining time for workers with the post-Christmas comedown, lack of funds and the realisation that day-to-day working life is back for another year making staff feel a little deflated or worse for wear.

Couple these stresses with the decline in weather over the winter and you have the perfect recipe for sickly members of staff. In fact, according to time and attendance research from 2019, 53% more sick days were taken in January compared to all other months of the year!

However, we found that’s not all bad news for British businesses. On average, UK workers took just 4.4 days leave for sickness last year – that’s the fourth lowest in Europe – showcasing how committed staff are to their work and their employers. But, how did this stack up to our fellow European nations? We crunched the numbers to find out which country’s workers were most and least notorious for calling in sick.

We’ve already mentioned that UK workers ranked fourth in Europe when it came to taking the least sick leave over the course of a year. However, who pipped them to the top three? 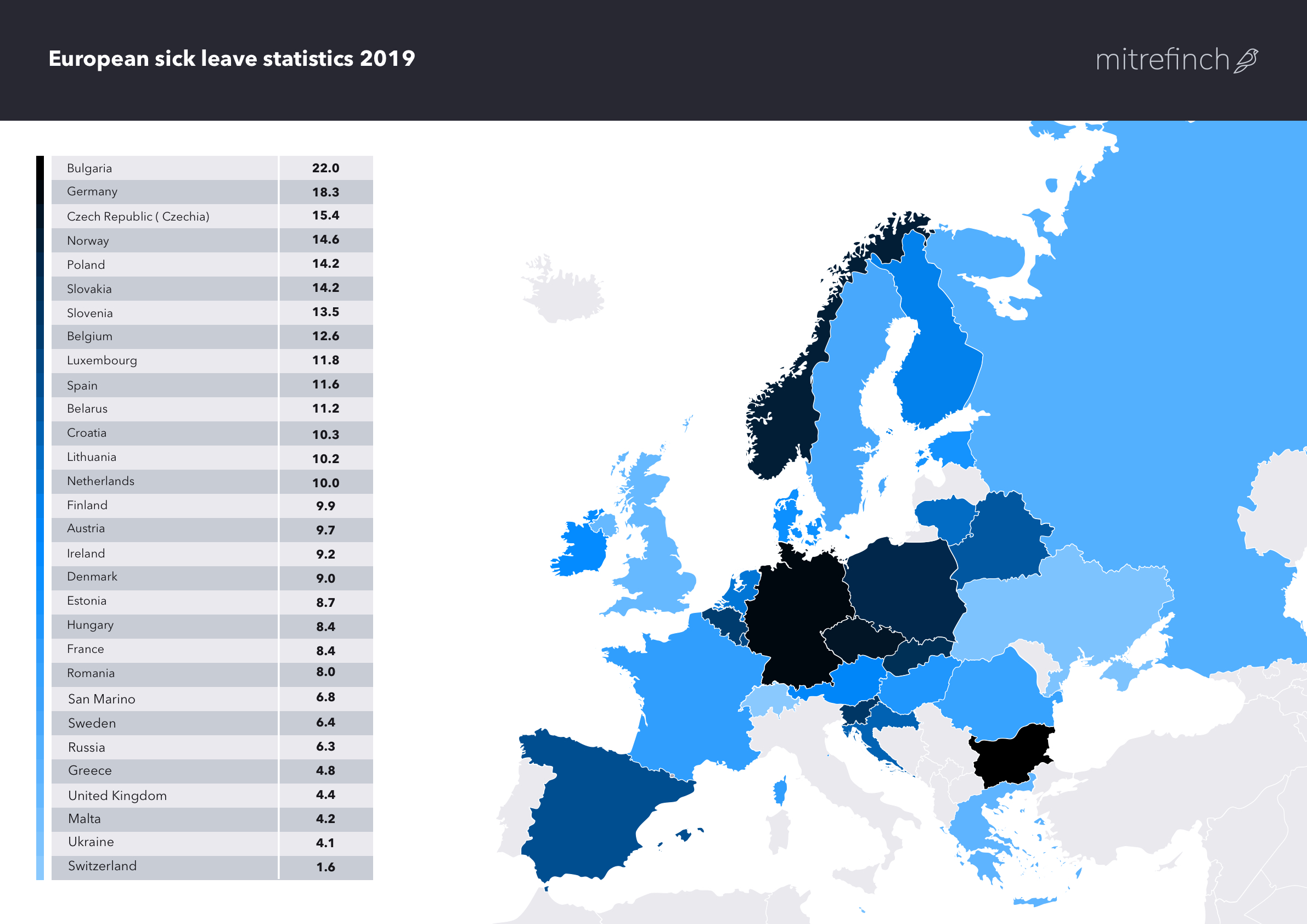 Taking just 1.6 days sick leave on average, Switzerland topped the charts when it came to exemplary attendance over a calendar year. The nation, which is synonymous for its finance and banking services industry and is home to major multinational brands including Glencore and Nestle, takes great care of its workers offering excellent salaries, annual leave entitlement and employment benefits. Is it possible these factors might be linked to the high attendance rates?

Following closely behind was Ukraine and Malta, where their workers took just 4.1 and 4.2 days sick leave across the course of a 12-month period respectively. Both of these countries are considerably different to Switzerland in terms of its socio-economic backgrounds so could it be other cultural factors that are influencing Ukrainian and Maltese workers to maintain excellent attendance? We’ll discuss that later!

Where are workers most likely to pull a sickie?

At the other end of the spectrum, it was workers in Bulgaria that were found to take the most time off for sickness over a calendar year. Our payroll software research found that, at 22 days a year on average, workers in the Southeastern European nation take over four working weeks a year off due to sickness creating a major strain on the country’s business and inherently, the wider economy as a whole.

With such a number of British and Irish expats living and working in Bulgaria we wanted to find out some of the pros and cons of working there specifically.

One of the main draws of Bulgaria is the cost of living – it’s around 48% lower than the UK – making it an attractive location for those looking to emigrate. The general consensus between those living there is that workers who make their money from outside of the country can ‘live like a king’. However, wages within Bulgarian businesses can be notoriously low meaning natives to the country need to ensure they manage their income effectively.

In terms of employment benefits in Bulgaria, one of the main things that stood out is that workers must have been with their employer for at least six months to be eligible for sick pay. However, the remaining entitlement to benefits mirrors similar entitlement levels to the rest of Europe.

Who else fell short?

German workers didn’t fare too much better taking on average 18.3 days sick leave, with those in the Czech Republic also taking off the equivalent of more than three working weeks with sickness (15.4 days).

Again, there is no clear correlation between these countries in terms of their socio-economic backgrounds so it could be these countries are more socially accepting of its workers taking time off from work when they need to.

This research is by no means exhaustive and as we mentioned in the opening it is purely to get a better picture of how the UK stands up to the rest of Europe once we had crunched the numbers. There are so many factors that are likely to impact how much sick leave is taken by workers across different countries and is something we will likely look at in future research!

While Switzerland and Bulgaria are polar opposites when it comes to how much sick leave its employees take across the calendar year, it would be important to establish how the following factors affect these countries and the other nations mentioned in this study:

How can HRs and employers maximise attendance?

If you feel that your workplace productivity is being impacted by poor attendance or a high incidence of absences due to sickness, the three tips below may prove useful.

Being able to log sick leave easily and accurately and to recognise patterns is the most effective way to start maximising attendance. This is especially important in industries that employ in vast numbers, meaning absences can go unnoticed if not tracked correctly. Implemented rigorous processes or a time and attendance system could help.

Identify the issue or reason for sick leave

High rates of absenteeism from employees can be down to ill health due to having an unhealthy lifestyle, negative working environment or they simply may not be enjoying work any longer. Employees could be having personal problems or financial wellbeing issues or could be concerned about something at work they’d rather avoid – these are all things employers can help address and prevent in the future.

Being able to pinpoint these patterns can allow businesses to provide informed intervention and strategies to maximise health in the workplace should it be needed.

Treat the cause not the symptoms

Offering rewards to staff for zero absenteeism can increase attendance at work, but this should be coupled with methods to address the underlying cause for missing employees. As well as improving your working environments to improve the physical wellbeing of your team, having initiatives to support staff with mental health, depression or anxiety is also integral to achieving long term improvements in attendance and a productive workforce.

The main message to take away from this research is to remember that sick leave and the employee benefits surrounding it are an absolute necessity within society and for any business that wants to empower its staff and achieve commercial success. However, companies must continue to work hard to ensure they create a cohesive environment that fosters creativity and ambition, and workers look forward to arriving at every day.

Time and Attendance
How to handle serial sickies

Time and Attendance
How to choose a time and attendance system